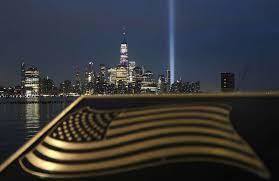 Tomorrow morning, each of the Siuslaw schools will take a moment to remember the tragedy of September 11, 2001.

The elementary and middle schools will conduct their tributes around 8:40am in the morning, and the high school tribute will be nearer 10:00am.

There will be a reading over the intercom, in conjunction with the Pledge of Allegiance and a moment of silence.

"20 years ago tomorrow, September 11th, 2001, our nation came under attack. A terrorist group hijacked commercial airplanes and crashed  them into the world trade center in New York City and the Pentagon building in Washington, D.C.  A fourth attack site was avoided when passengers reclaimed control of another plane .

2977 were killed and many thousands more were injured.

Any American old enough to remember the day's events will recall the fear and uncertainty that gripped our nation in the days and weeks that followed. They will also recall the brave men and women who rushed-in to be of help during our nation's time of need.

On this, the 20th anniversary of the September 11th attacks, you are all invited to honor the US Flag in a way that is appropriate to your hearts and minds. This may include joining me in the Pledge of Allegiance or by respectfully staying silent. We will then conclude with a minute of  silence."